Where we talk about the Tools, Trends, and Advancements in Radio

I set the radio buttons in my rental car. (Yes, it took a minute to find them.) I pulled on to the 405 Freeway. And for the next hour I found myself surprised by just how much I was really enjoying KIIS Los Angeles.

It shouldn’t have been a surprise. KIIS is a perennial on many people’s list of the best top 40s. But as a Sirius XM subscriber, I’ve had KIIS as a punch-button, even in the Northeast, for years, and yet I hadn’t listened much lately. I knew I should listen, if only out of professional curiosity, but whenever I went there, I didn’t stay long.

The difference, I now realize, was hearing KIIS with the local commercials. On satellite, the KIIS stopsets already felt very noticeable, surrounded as the station was by satellite’s own commercial-free music channels. But it was also the tenor of the ads. The satellite stopsets sounded like what you’d hear on an online stream — some produced vignettes, some tax-relief ads and start-your-own-business spots that you might expect to hear on a News/Talk station. They weren’t the worst of the ads I’ve heard in recent years, but they didn’t say “fun, uptempo CHR station” either.

Hearing the station in L.A. was a much different experience. Maybe it was the combination of sunshine and Southern California. But the stopsets on KIIS as heard in Santa Monica flew by. And it proved that the content of spots makes a difference.

So did a station launch that I worked on last year. The station was fun and uptempo. The ads, in the first few days, were not — debt-relief and graphic medical spots, sometimes back to back. Even one of my friends, not aware that I worked with the station, commented on them. Until then, I’d accepted the spots as all a new station could hope for. But I passed my friend’s feedback on to the PD.

What happened next was a pleasant surprise. The PD worked with sales to help minimize the impact of the downer spots. But the station also received fast acceptance from the local ad community, even in advance of the first numbers coming back. Then the first ratings were promising. For whatever reason, the tenor of the spots improved rapidly.

The result was that within 45-60 days of the launch, listening to the station became an entirely pleasurable experience. I’m sure some of it was just a function of the usual shakeout of any new station’s issues. But I was already predisposed to like the music. Better spots just made the entire station experience better.

Not every station is able to upgrade its available sponsors that quickly. The same friend heard another successful recent station launch, owned by a large group broadcaster, and reported on the spots he heard online: all of them dry-voice, minimally produced, and with a hard-sell delivery. There were two tax-relief spots, a credit-relief spot, mold remediation, “and on and on.”

One of the things I realize now is that I’m not sure which hard-sell or downer spots I’ve heard where in the last few months. Was the ad that promises to cleanse rotting food out of your intestines on a client station? Or have I just heard it so much recently that I’m unfairly tagging somebody? What about the ads encouraging listeners to talk to the doctor about their poop? It sometimes feels like no major-market outlet, no matter how successful, is safe from downer spots — even over the air. But hearing KIIS locally, I know that’s not always the case.

After these recent experiences, I now believe that there’s some value in being the station that can say on the air, “While every station has some commercials, we’ll never run ads that make you depressed or uncomfortable.” It’s been years since stations talked that directly or earnestly about what they do. But I now feel it’s as important a point of differentiation as “commercial-free.” And a unique one, because “commercial-free” has been cheapened by overuse and misuse. In fact, unlike “commercial-free,” it’s not anti-sponsor. It’s supporting the integrity of the sponsors you do run.

I also think there are ways to finesse the quality of a station’s spots, even if it can’t hold the line on downer spots altogether. The most obvious is keeping them away from each other. Because many stations do not. And because it is impossible to hear two hard-sell spots back to back without thinking, “Another one? Really?”

There is also a specific combination of gratuitous and unpleasant that makes some spots particularly unlistenable, and makes other hard-sell spots around them feel that much worse. If a station is only in a position to turn down a few ads, digestive functions would be a logical starting place. I don’t want to deny anybody with the inability to break down food enzymes the help they need. Hearing the results described graphically is another matter. And any morning team who led an equally explicit discussion of the same topic would be in trouble these days.

Placement makes a difference, too. The tax-relief spots aren’t entirely gone from the station I work with. But when they follow the concert spot and the jewelry spot, they rankle less. Many stations used to have a firm protocol of starting with the best, most-produced spots first. I don’t hear much of evidence of that these days, but perhaps that’s because so many stopsets have no “most-produced” spot.

Over the last decade, we’ve made a commitment as an industry to improving the quality of our spots — often because broadcasters feel it’s a more attainable goal than tackling spotload or converting from spots to sponsorships. Downer spots and graphic spots – coming in from bulk purchasers outside our purview – are undermining all the hard work we’ve done with other advertisers.

In Canada, there was a regional spot last year in which a caller complains that mortgage woes were keeping him up at night, so the mortgage agent sings him a lullaby. That ad is undoubtedly better in the hearing than the retelling, but it proves that even financial help can be made entertaining or even touching. The tenor of our spots is something that broadcasters can seek to control, and when we do, it makes a difference.

For more articles on building a digital strategy for radio and radio trends 2016 and digital tools for radio, subscribe to the SoCast blog! 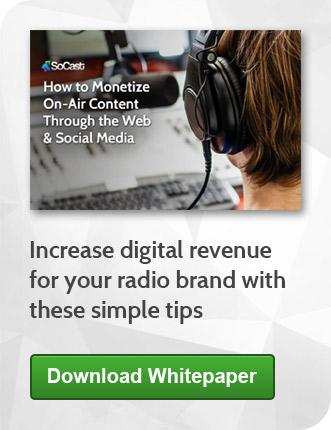 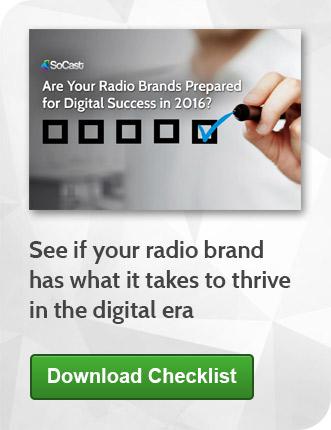 Get news and updates to help you grow in digital.